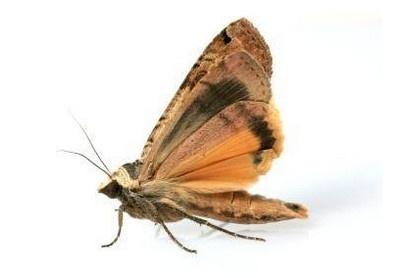 By the time you notice moths in your home, they have usually already found something they like to eat. Fortunately, their feeding choices are rather limited, and you can usually find where they are feeding rather quickly.

Food-eating moths come in a variety of types, but are usually frequenting your pantry or kitchen cabinets, pet food, or garbage can. They especially like to eat grains, cereals, flour, pastas, powdered milk, bird seed, and other similar foods. These foods are less likely to attract moths if they are stored in air-tight containers.

Moth eggs are laid in or near these foods. The eggs will develop into larvae, which will start eating the food. In their immature stages, you are unlikely to see them because they will be close to the same color as the food they are in.

The most common type of food moth is the Indian Meal Moth, which is also sometimes referred to as the North American High-Flyer. It is also the most destructive. The larvae are often referred to as "waxworms."Â These moths are also known as flour moths or pantry moths. A female Indian Meal Moth can lay up to 300 eggs at one time. As adults, they grow to be about half an inch long.

Fabric moths include species like the Webbing Moth and the Casemaking Moth. Both of these moths are only about one fourth of an inch long, and do not like to be seen, and rarely are. Generally, the only way you will know that these moths are present is when you see holes in your fabric.